You've probably been in a public house and watched a table full of seriously cool people talking about books and thought, “Man, they look seriously cool. I would like to be one those people." Well, I have. And now I am.

My long-time pal and former co-English degree taker Hannah asked me to be part of a new book group in late 2017. I was keen on the idea, though nearly turned the offer down because I have three small children, a freelance business to run and no ability to read anything beyond 9pm without instantly falling asleep.

But the lure of looking seriously cool proved too much and I said yes. This month, we celebrated roughly 14 months of book group, which is no particular anniversary at all. I’ve met several new people, read books I would not have considered otherwise, and very much enjoyed the whole shebang.

With this vast experience in mind, I thought I’d share some of the things we’ve done and decisions we made to start the book group. And so, in no particular order, here they are.

The only person I knew before starting book group was Hannah. And though some people in the group knew a couple of other members, no one knew everybody in book group. If that makes any sense at all.

While it’s great to talk books with your best buds, this is also an opportunity to meet new people. We don’t see each other regularly outside of book group, so we’ve got to know each other book by book. I kind of like that.

As with all group situations, there is always one person who tends to take control and make things happen. But no one likes a bossy boots and so instilling a little democracy into proceedings is a good idea.

Take it in turns to choose what book to read. Listen to each other’s opinions when it comes to picking a venue. Don’t kick up an unnecessary stink if someone decides it’s a good idea to read all 1,000,000 pages of Anna Karenina (just buy the audiobook and go double-speed).

Choose a wide range of books

Our choices so far have been a real mix and I think it’s helped make sure each discussion feels different and interesting. It’s been mostly novels so far, but we don’t have any rules about that – a book is a book.

I reckon if you pick a load of similar books from the same genre, things will get boring pretty quickly. You’ll make the same points and come to a familiar consensus every time. Like I said above, I’ve read stuff I know I wouldn’t have read without the group. That’s a good thing.

We’ve developed a few conventions that I think have helped us get to a format for the discussions that seems to work. One of those is the opening statement. Starting with the person who chose the book, we each spend a minute or so summing up our overall thoughts.

To be clear, this is in no way a formal or written-down statement. It’s just a chance for us all to set our stall out at the beginning of proceedings. It’s actually quite useful to get a flavour of where the conversation might go and then we take things from there.

Questions in a hat

So far, we’ve had little trouble making conversation, but our discussions are led by questions that we write down (and place in a seriously cool container) before we begin. Someone pulls out and shares the first question once the opening statements are done.

These questions can be about anything. Sometimes they relate to specific parts of the book and other times they are more broad and thematic. In our last book group, my question was simply: “Why did this win the Booker Prize?” It’s not about coming up with something clever – it’s provoking conversation.

Give the book a score

Oh, come on. What’s the point in having a book group if you’re not going to hand out arbitrary scores based on how you feel at a very specific moment in your life? How will you possibly know which book is best?

Once we’re done talking, we each write a score on a piece of paper and take turns to share our judgement. And of course, once we see what others have scored, we immediately want to make adjustments. But there can be no going back. First score is final score.

Don’t take it too seriously

This is very important. If you start a book group, please make sure that both you and your fellow groupees are having fun. Don’t get cross at someone for disagreeing with you or having terrible opinions. Just treat it as a seriously cool way to meet up with likeminded folk and talk books.

Take a look at all the charts and graphs following my recent survey of Draft Mode newsletter subscribers. 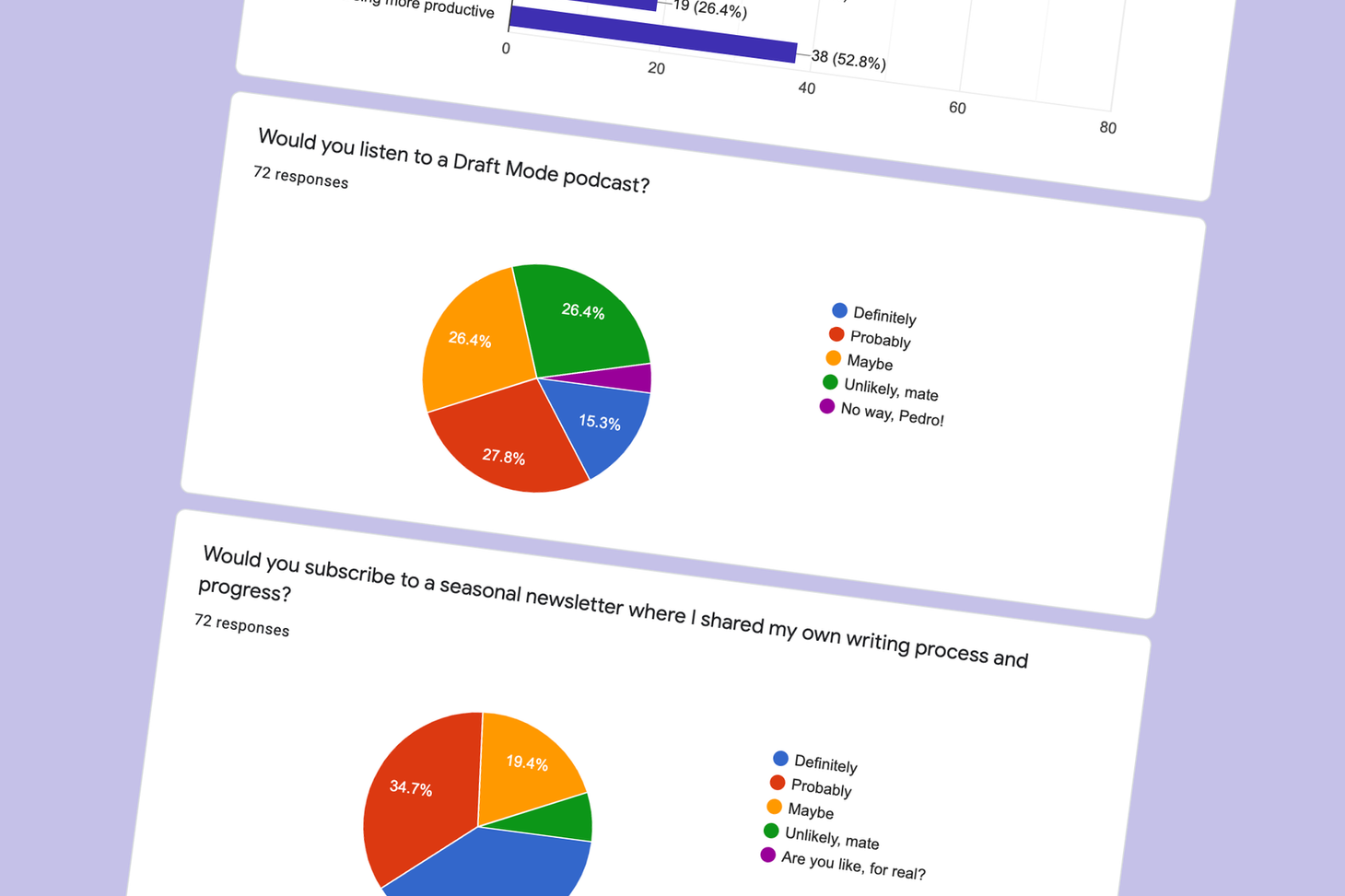 A silly little doodle I did during a video call has got me thinking about ideas for new characters and stories. 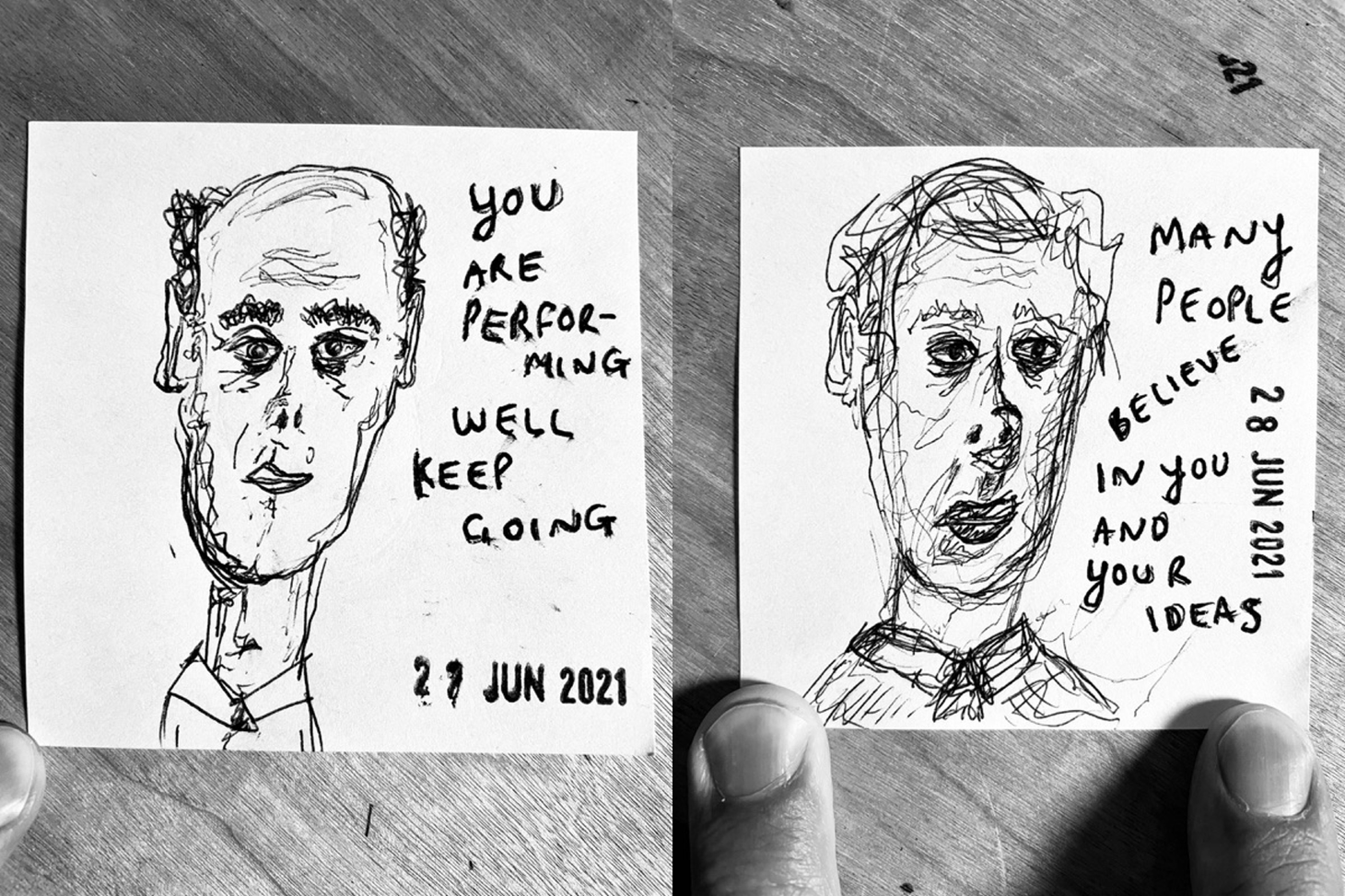 How to convert a Google Doc to Markdown or HTML

Ever want to convert your Google Docs to Markdown or HTML? I have just the Google Chrome extension for you.